Healings of Aquamarine, Aquamarine Heals emotional trauma, Cools high temper and conflict, Relieves stress, helps get in touch with suppressed emotions, Brings peace, Clears the mind, Calms the heart and many healing in this stone.

We remove the certificates and other information on the gems we sold to protect the dignity of the sellers who resell the gems purchased from us. 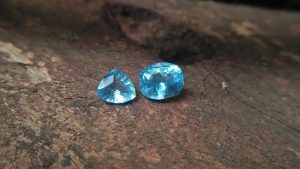 Beryl is a mineral composed of beryllium aluminum cyclosilicate with the chemical formula Be₃Al₂Si₆O₁₈. Beryl is hexagonal mineral with 7.5 – 8 hardness according to the more hardness scale. Beryl hexagonal Crystals can be up to several meters in the size. But, Double terminated crystals are very rare to see.

Most people know Aquamarine and Emerald, do you know, that’s both gemstones are beryl family gemstones. Beryl is found the colors such as Green, Blue, Yellow, Red, White, Pink, Purple, Brown, Orange. Red beryl is extremely rare. It is called “Bixbite”. Pink to Orangy-pink variety of beryl is called as ” Morganite“. Green, blue or greenish-blue is mostly known as Aquamarine. But, Emerald green is different. Emerald colored green by trace amounts of chromium and sometimes vanadium. Colorless varieties are called as “goshenite”. Pale yellow to brilliant gold beryl is called as ” Heliodor”.

Beryl can reduce stress. It will help you let go of your unnecessary or unwanted emotional baggage. Beryl is often used to help you find the answers in spiritual life. Beryl will promote creativity and raise your intelligence.

Beryl can help the organs of elimination to function better. It can strengthen the circulatory systems. also, it increases the body’s resistance to pollutants and toxins. Beryl gives very positive favorable vibrations to give you the ability to have quick intellectual responses and mental clarity. Beryl will bring you good fortune and good luck. Beryl is a crystal of energy, healing and strengthening the body’s entire vibrational field. Beryl color varieties work with different chakras. Red beryl stimulates with Root and Heart chakra. Green beryl helps to clean the heart chakra. Emerald stimulates the heart chakra. Aquamarine stimulates the throat chakra. Aquamarine is also used to align all of the chakras and enhance the aura. Morganite cleanses the heart chakra. Heliodor stimulates solar plexus and crown chakra. Goshenite can be placed on any chakra to clean and stimulate.