Garnet boosts the immune system and energy levels and spiritual stone of higher thinking and self-empowerment, also a stone of strength and safety 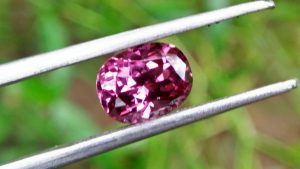 Garnet is the traditional birthstone of those born in January.

This nesosilicates Gemstone cleanses and re-energizes the chakras. Garnet Associates with Base and Heart Chakra and regenerates the body and stimulates the metabolism. Garnet regenerates the body, stimulating metabolism.
Garnet treats spinal and cellular disorders, purifies the blood, heart, and lungs, and regenerates DNA and assists assimilation of minerals and vitamins Such as iodine, calcium, magnesium, and Vitamins A, D, and E. [ Vitamins and Minerals Guide ]

Be the first to review “Natural Pink Garnet” Cancel reply