This heart shape red garnet is found from direct mining in the city of gem Ratnapura Sri Lanka. Danu group is humbly pleased to be able to provide such precious gems to the customer directly from the source. Explore more with Danu Group Gemstones Collections!

We remove the certificates and other information on the gems we sold to protect the reputation of the customers who resell the gems purchased from us! Because we supply gemstones to our end customers as well as other businesses in the gem industry. 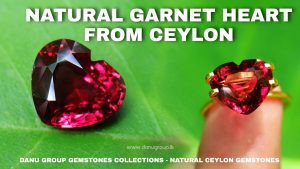 Red is the most popular and common colour in Garnet Family. But, Fine Quality Open colour 5 ct up size stones are quite hardly found from the minings. Garnet is durable enough to wear every day and its hardness is 6.5–7.5 according to the Mohs hardness scale. Garnet is also a very special healing crystal for stimulating human chakra energy fields. Some varieties are also worn for astrological purposes according to astrological science.

This heart shape red garnet is found from direct mining in the city of gem Ratnapura Sri Lanka. Danu group is humbly pleased to be able to provide such precious gems to the customer directly from the source. Explore more with Danu Group Gemstones Collections!